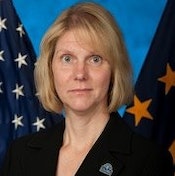 Ms. Therit was appointed to the senior executive service in 2015 as the Associate Deputy Assistant Secretary for Resolution Management at VA. She provided day-to-day oversight of VA's discrimination complaint, harassment prevention, and alternative dispute resolution (ADR) programs. She led two regions comprised of six district offices with over 250 full- and part-time employees.

Prior to joining the VA in 2006, Ms. Therit served from 2000 to 2006 with the Department of Health and Human Services (HHS), Centers for Medicare and Medicaid Services in Baltimore, MD; 1994 to 2000 in numerous positions of increasing responsibility with the Equal Employment Opportunity Commission in Washington, DC, and Ms. Therit began her federal career in 1991 with the Office of Personnel Management in Washington, DC.

Ms. Therit is a member of the Association for Conflict Resolution, the Maryland Council for Dispute Resolution, and Mediators Beyond Borders. In 2018, she received the ICARE Award from the Secretary of Veterans Affairs, and in 2005, she received a Gold Medal Award for Outstanding Workforce Diversity/Equal Employment Opportunity Service from the Baltimore Federal Executive Board. She received a Master of Science in Conflict Resolution from George Mason University and a Bachelor of Arts in International Politics from George Washington University, in Washington, DC.