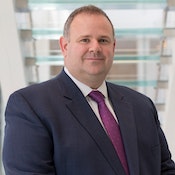 Philip A. McNamara serves as the Assistant Secretary for Administration. McNamara has more than 22 years of experience navigating Washington's political, government, and policy landscape in high-pressure, high-visibility leadership roles working alongside top officials. Before joining DOT, McNamara served as the Director of Government Relations at The Pew Charitable Trusts.

He returns to government after serving all eight years with the Obama administration in senior executive roles at the U.S. Department of Homeland Security, where he concluded his service as the Assistant Secretary for Partnerships and Engagement / Intergovernmental Affairs.