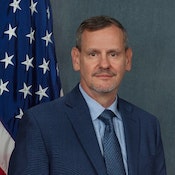 Mr. Mark Green is the Deputy Assistant Secretary, Human Capital and Diversity and Chief Human Capital Officer for the United States Department of the Interior. In this role, he leads the Department's Human Capital Management, Employee Development, and Occupational Safety and Health teams in providing support to a workforce of over 70,000 employees. Prior to this assignment, he served as the Associate Deputy Chief of Business Operations for the United States Department of Agriculture (USDA) Forest Service. In that capacity, Mr. Green led the critical business programs of Human Resources Management, Procurement and Property Services (Acquisitions), Office of Safety and Occupational Health, Office of Grants and Agreements, and Office of Regulatory Management - all in support of 40,000 Forest Service Employees. Mr. Green has held many other key leadership positions within USDA including Director, Human Resources Management for the Forest Service where he led and implemented numerous major hiring improvements and many other nation-wide change management and work environment initiatives.

Prior to the start of his civil service career, Mr. Green served for over 24 years in the United States Army before retiring. Throughout that time, he held various positions where he led people performing operational missions in support of National, military priorities. His assignments included serving in multiple units at a variety of duty locations in the United States, Europe, South Korea, Bosnia, and Iraq.

Mr. Green is a graduate of five United States Army resident leadership courses, he earned a Bachelor of Science Degree in Human Resources Management from Park University and an Associate Degree in Criminal Justice from Central Texas College, and he has completed the Office of Personnel Management, Federal Executive Institute, Leadership for a Democratic Society Program.