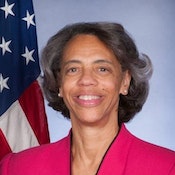 Ambassador Bernicat previously served as Acting Assistant Secretary for Oceans and International Environmental and Scientific Affairs (OES) and concurrently as the Senior Official for Economic Growth, Energy and the Environment (E) from January-August 2021. She was a Senior Advisor to the Under Secretary for E from 2020-2021 and Principal Deputy Assistant Secretary in OES from 2019-2020. She served as Ambassador to Bangladesh from 2015-2018 and to Senegal and Guinea-Bissau from 2008-2011. Ms. Bernicat previously served domestically in the Department of State as Deputy Assistant Secretary in the Bureau of Human Resources; Office Director for India, Nepal, Sri Lanka, Maldives and Bhutan; Senior-Level Director and Career Development Officer in the Bureau of Human Resources; Special Assistant to Deputy Secretary of State John Whitehead and Watch Officer in the Department's Operations Center. She was Deputy Chief of Mission in Bridgetown, Barbados and Lilongwe, Malawi and Principal Officer in Casablanca, Morocco. Ms. Bernicat's other overseas assignments include New Delhi, India; Marseille, France and Bamako, Mali. She is the recipient of the Secretary of State's Distinguished Service Award and numerous other Department awards.