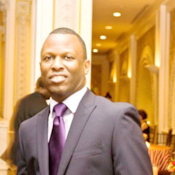 Mozie's prior experience includes serving as a senior Human Resources Specialist at the USITC from February 2010 to November 2014. During that time, he completed stints as Acting Director of the USITC Office of Human Resources and Acting Deputy Director. Prior to his USITC experience, Mozie worked with the government of the District of Columbia (DC), serving as a Management and Program Analyst (HR) with the DC Department of Human Resources and an HR Management Liaison Specialist with the DC Department of Energy and Environment.

Mozie was a Recruiting Officer for the Metropolitan Atlanta Rapid Transit Authority (MARTA) from 2006-2007. Previously, he was an HR Administrator and Project Supervisor with CACI, Inc. Mozie served with the U.S. Army Reserves from 1988-1997 and is a veteran of Operation Desert Storm/Shield.

The U.S. International Trade Commission is an independent, nonpartisan, fact finding federal agency that makes determinations concerning the impact of imports and their potential injury on domestic companies. The USITC staff includes experts who analyze virtually every commodity imported into the United States. The USITC provides data on international trade to the President, Congress, other federal agencies, and the public.