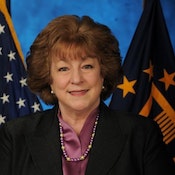 Ms. Otero is the Department of Labor's Deputy Chief Human Capital Officer and has more than 30 years of Federal service. Ms. Otero has held a number of key leadership positions in the human capital arena throughout the Federal Government.

Ms. Otero proudly served on President Barack Obama's Task Force with responsibility to increase Federal Employment Opportunities for Veterans. Early in her professional career, Ms. Otero also worked as a staff member in the US House of Representatives.