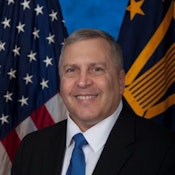 A retired U.S. Air Force Colonel, command fighter pilot, and operational test pilot, Mr. Krause served as Special Assistant to two Chairman of the Joint Chiefs of Staff during Operations ENDURING FREEDOM and IRAQI FREEDOM and was Joint Task Force Southwest Asia Weapons Officer for Operation SOUTHERN WATCH. Mr. Krause was a combat mission commander in Operations DESERT SHIELD, DESERT STORM, and DESERT RESOLVE with more than 2800 flight hours and credited with over 100 combat and combat support missions, and he was awarded the Distinguished Flying Cross for “Heroic action under fire.