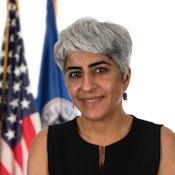 Director of OPM and Chair of the CHCO Council

Kiran Ahuja serves as the Director of the U.S. Office of Personnel Management (OPM). After more than two decades in public service and executive nonprofit work, she was nominated by President Joe Biden for her current role before being confirmed by the United States Senate on Tuesday, June 22, 2021. Director Ahuja is the first South Asian American and first Asian American woman to lead OPM.

In her role, Director Ahuja leads OPM in its work to recruit, retain, and honor the American workforce that's landing rovers on Mars, fighting climate change and cancer, and building the country back better.

Previously, Director Ahuja served as OPM Chief of Staff from 2015-2017. In this role, she worked on policies and initiatives that reached over 2.1 million workers at every federal agency and department. While Chief of Staff, Director Ahuja led inter-agency efforts to engage federal workers, attract skilled talent into government, and expand opportunities in federal service to every American. She also worked to strengthen OPM's internal operations as an agency and provide stable leadership at a challenging time.

Her deep commitment to OPM's mission, track record of bringing people together to solve tough problems, and expertise in human capital issues led to her appointment in November 2020 to then-President-Elect Biden's Agency Review Team as Team Lead for OPM.

Director Ahuja knows how important investing in America's workforce is because of her years of experience in the federal government in both career and appointed positions. She started her career first as an attorney at the Department of Justice and later spent six years as President Barack Obama's Executive Director of the White House Initiative on Asian Americans and Pacific Islanders.

In addition to her federal service, Director Ahuja spent years as a leader in the non-profit sector. She previously served as the founding Executive Director of the National Asian Pacific American Women's Forum and most recently served as CEO of Philanthropy Northwest. Director Ahuja is a graduate of Spelman College and the University of Georgia School of Law.