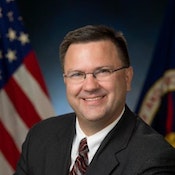 Since March 2018, Pyle led the Executive HR Directors for NASA's ten field Centers across the country in the development, execution, and integration of HR services, programs, processes and policies.

Originally from Corpus Christi, Texas, he earned his Bachelor's in Political Science and Master's in Human Resources Management from Texas A&M University. He joined NASA in 1995 as a Human Resources Representative and started his first supervisory position after 10 years. Since 2005, Pyle has held progressively more responsible leadership roles including a 9-month stint as a front-line leader in Engineering and a one-year leadership development assignment to Washington, D.C.'s Headquarters Office and the World Bank's International Finance Corporation.

Brady joined the Senior Executive Service in March 2016 as the HR Director for NASA's Johnson Space Center, where his team of 100 civil servants and contractors attracted, retained, and developed more than 3,000 civil servants - including Astronauts - who support the International Space Station and other human space flight programs.

Brady is a recognized leader in NASA, receiving NASA's Outstanding Leadership Medal in both 2012 and 2018.